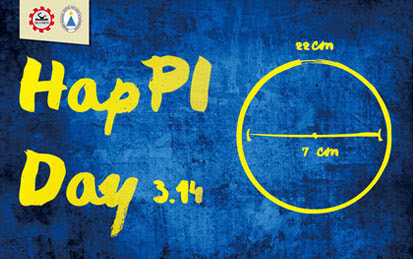 Yesterday (March, 14) people around the world celebrated Pi Day. Pi, known as Greek letter, “π”,   is mathematics symbol that represents the ratio of circumference of a circle and its diameter (3.141592…). It is celebrated on March 14 every year. March 14 is chosen since it is the first three digits of this never ending number 3.14. Interestingly, it is Albert Einstein birthday as well.

The earliest celebration of Pi Day was organized by physicist Larry Shaw 30 years ago at the Exploratorium, a science museum in San Francisco. On March 12, the U.S House of Representatives recognized March 14 as the National Pi Day. People from students, teachers, mathematician and pie lovers alike celebrate this day with different creative ways till today.

People all over the world, from schools to tech giants, came up with quite interesting ideas in celebrating. Students were eating pies and wearing pi-themed costumes to school. Microsoft offered a 31.4 percent discount on a selection of computers, which is apparently their tradition every year. Twitter users are celebrating by making the hashtag #PiDay the trending topic yesterday. Bloggers or YouTubers who are famous with their mathematics content also uploaded special videos to celebrate the occasion.

Even everyone out there who does not enjoy numbers in daily life and have only the slightest idea about what Pi is, joined the event by celebrating “pie” or “pi”-zza day, just to join the fun. In USA, famous pizza joints like Domino and Pizza Hut were giving away pizzas with their own respective deals. People were baking their own pi-themed pies and uploaded it on Twitter.

That how popular Pi day is.

The famous number in Mathematics which is denoted by the Greek alphabet, π, translated as pi and pronounced as ‘pie’ as in ‘apple pie’. Pi is the symbol that represents the ratio of circumference of a circle to its diameter that was approximately equal to three. So, by its definition, pi equal to the circumference divided by the diameter. In 287-212 B.C., Archimedes of Syracuse one of the greatest mathematicians has carried out  the first calculation of pi. He used Pythagorean Theorem to find the areas of two regular polygons to approximate the area of a circle. As a resulted, he showed that pi is between 3 1/7 and 3 10/71.

In fact, Pi has been known for almost 4000 years, but it’s still a kind of approximation. In 1761, Johann Heinrich Lambert the Swiss Scientist found that pi is irrational number. It can not be represented as a ratio of two integer numbers. In the other words, pi known as a never ending number or an infinite decimal (3,141592…).

Actually, in this 21st century, mathematicians and computer scientists find a new approach as a combination of computer technology and computation to calculate a representation of pi to over ten trillion digits beyond its decimal poin.. But still, the exact value of pi has never been proven.

Want to find some interesting facts about Pi? Here they are.

What Makes Pi is so Unique?

Apart from representing the ratio of circumference of a circle, surprisingly Pi has so many useful benefits in our life. Here is a list of how Pi is used in other fields.

This concludes that there are more than 3.14 reasons why we celebrate Pi day yesterday.

HapPi day everyone! and let’s have some Pi(e).