Gender equality still becomes a hot issue in today’s world. Women and men should have the same chances to achieve their goals, shouldn’t they?

Every April 21, Indonesia celebrates Kartini Day, she was a Javanese Princess who fought for women’s right. In the late 1880’s, women in Indonesia did not have the privilege of education. However, being born in an aristocrat family who worked for the Dutch colonial government allowed Kartini to attend Dutch-language primary school. Ironically, the young Kartini could not continue her education due to Javanese old traditions, early age marriage and education exclusion for women. With her husband approval, Kartini continued to become a feminist activist and later in 1903 she opened the first Indonesian primary school for local girls. For Indonesian, Kartini is one of the nationalist figures who fought to raise women status in Indonesia.

The condition where women were not allowed to enrol at schools did not only happen in Indonesia but also in many other countries around the world. Even for women who did get education, it was usually in fields like midwifery or nursery. It was even harder for a woman to get into fields that were dominated by men like science and mathematics. In spite of the obstacles, some women marked the history as the most prolific mathematicians of all time.

Who are they? Let’s go back to the history of mathematics.

The first known female mathematician is Hypatia of Alexandria. After being educated in Athens, she followed her father’s footstep, Theon, to become a mathematician and philosopher. In about 400 AD she taught mathematics and philosophy, focusing on Neoplatonism founded by Plotinus. Historically, she assisted her father in writing the eleven parts of Ptolemy’s Almagest and the new edition of Euclid Elements. Even though she did not have philosophical work, she was an excellent writer, editor and preserver of earlier mathematical works. A story of Hypatia and the conflict of religion and science in that time was captured in a movie entitled Agora which was released in 2009.

What comes to your mind when you hear the words “female professor?’’ Some references stated that an Italian mathematician, Maria Gaetana Agnesi (1718-1799) was the first female professor. She was born from a wealthy family and recognized as a child prodigy. She could speak Italian, French, Greek, Hebrew, Spanish, German, and Latin, and was called as “Seven-Tongued Orator”. Her most valuable contribution was the Analytical Institutions for the Use of Italian Youth. Agnesi is also called as the first influential woman mathematician since Hypatia.

Around 58 years after Agnesi’s birth, another female mathematician called Sophie Germain was born in Paris. Having developed an interest in mathematics, she started to study on her own in her father’s library to the dismay of her conservative parents. Ecole Polytechnique, the most prestigious French academic institute at the time, prohibited women to attend, but Sophie refused to give up. She borrowed lecture notes from Ecole’s students and sent a paper under a male student’s name to Lagrange, a renowned mathematician at the time. Lagrange was so impressed until he discovered that it was actually written by a woman. Sophie continued to produce mathematical work and became a mathematician acknowledged by the likes of Gauss and Dubois.

In the modern era, we have Grace Hopper, a computer scientist and US Navy rear admiral, who coined the term the Amazing Grace for her myriad accomplishment in mathematics and computer science as well as high naval rank. There is also Maryam Mirzhakani, an Iranian mathematician who is currently a professor of mathematics at Stanford University. She is the first woman and the first Iranian to be honoured with the Fields Medal, the most prestigious award for mathematics.

Education for woman especially young girls should get more attention from people around the world. Unfortunately, there are still many young girls that do not have the opportunity to get education. Based on UNICEF findings, more than 30 million girls in 2013 did not have access in primary and secondary schools. We can say that many countries do not reach gender parity whereas educating girls can break the cycle of inequality.

The above outstanding female mathematicians proves that everyone deserves a chance to pursue their talent, and that being a female should never be a reason for someone to get underestimated or discouraged. 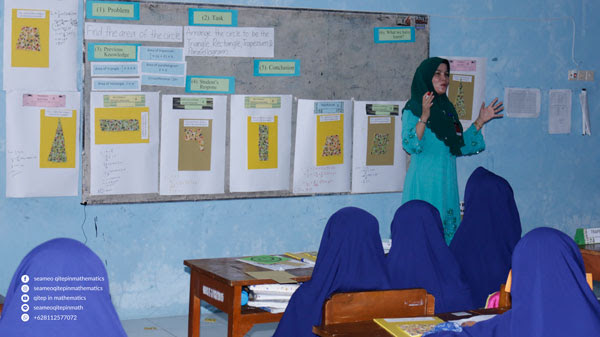 Today, there are several organizations that promote gender equality in mathematics, for example, Association for Women in Mathematics. This organization’s goals are to encourage women to study and to have active careers in the mathematical sciences, and to promote equal opportunity and treatment of women in the mathematical sciences. Another organization is National Girls Collaborative Project which is located in the US. This organization is dedicated to encourage women to take opportunity in STEM field. It focuses on maximizing access, using the leverage of a network, and creating gender equality in STEM.

Instantly, for you ladies around the world, don’t worry to explore your potential, there is a lot of support you can get from people around you. And let’s rock the world.