Pythagorean Theorem is one of the most famous theorems in mathematics. Centuries ago many ancient civilizations discovered that the square of a right-angled triangle hypotenuse was equal to the sum of the squares of the other sides, then Pythagoras (c. 570-495 BC) was credited for its first recorded proof.

However, do you know that aside from helping us with right-angled triangle, Pythagorean Theorem can produce a really beautiful thing as well? Take a look at the following Pythagoras tree. 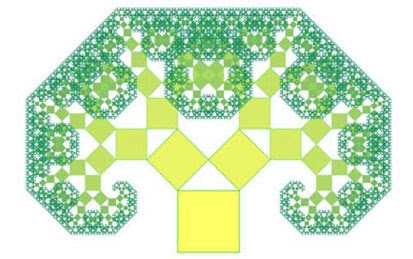 Pythagoras tree is a type of fractal which is constructed from squares. In order to make one, we start with one coloured square, at the top of it we construct a right-angled triangle (the angles of the legs can be of any size) such a way that its hypotenuse stick to the side of the square. Then, we build other two coloured squares along the other two sides of the triangle.

Repeat the construction recursively on the other two squares, for as many iterations as you can. The result is what we call as Pythagoras tree.

We can also construct Pythagoras trees with isosceles right triangles as shown in the figure below.

Can you guess how the following fractal is made? 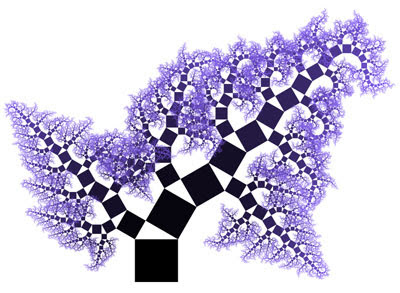 Now, it’s time to challenge yourselves to make your own Pythagoras trees.