‘Mathematics is an easy and exciting subject to learn‘. When you hear or read this statement, what is on your mind, will you agree or disagree?. Mathematics is embedded in our daily lives, our culture, in which art is a part of. In painting,  the role of mathematics has already been widely applied. For example in one the most famous paintings, The Mona Lisa, ratio plays an important role. In another kinds of art, namely dance, mathematics also has an important role.

To some, Mathematics is generally seen as a bunch of numbers and formulas, which is considered to be near polar opposites of dancing. General society might see that these two worlds have nothing in common. Yet, when we look closely, similarities and connections reveal themselves.

There are thousands of cultures spread around the globe and each have their own dances with various kinds of moves. As we looked closely into these dances, we can see that they are made of rhythm, shapes, and patterns. These can be linked to the mathematical concepts. Therefore, mathematics can be taught using dance. Teaching mathematics with dancing can help students to understand abstract concepts of mathematics more joyfully. Implementing mathematics in ‘real life’ such as in dancing will certainly help to erase the stigma of the subject being dry and inaccessible.

Expert in mathematics from Australia, Dr. Mathews says “Math involves creating symbols and putting them together to represent the real world”. Based on this theory, students become the mathematics themselves. It has been proven in an Australian based school that students understand the mathematical concept better when they are encourage to be creative and create their own symbol, relating them with stories in their own world.

Mathematical concepts such as Geometry can be introduced to students by teaching them dancing. This concept can be seen in the positioning of a dancer’s body in relation to themselves and their surroundings. Within the dancer’s body, he or she can create shapes, angles, and lines which contributes to the effect of the dance. Concerning shapes and angles, dancers need to focus on the angles they make with their bodies to form the correct shapes.  Meanwhile, talking about the lines concept through the dance, dancers often have to think about staying parallel to other dancers to preserve formations. They need to keep the same distance between each other no matter how they move. 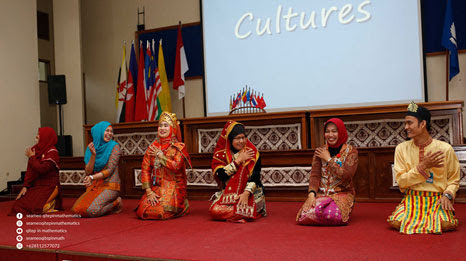 Furthermore, Geometry is also used to unify between one and another dancer. Without Geometry, dancers would not be able to be synchronized and create shapes. Besides Geometry, everything in dancing has to do with patterns. Dancers memorize patterns in the steps in their dances. The rythm in music usually consist of patterns in the form of beats. This pattern is generally syncronized with the dancers’ movement.

One of a well-known dance which employs the used of Geometry is Saman. This dance is originated from Aceh, Indonesia. The Saman dance requires high movement synchronization among each dancers, the timing of each dancer plays an important role. From this dance we can also explore other mathematics concepts such as line, symmetry, and patterns. The larger number of dancer, the more possible relations of lines, shapes and patterns arise from their interacting bodies.

Another example of mathematics used in dancing is in figure skating. Assistant Professor of mathematics at Towson University states “Figure skating is a great model for mathematical instruction”.  Brian Shackel and Marion Alexander of the University of Manitoba mentioned that the angles of the skaters, is an important aspect in ice skating such as when they jump, spin, skid, glide, and even during landing. The more accurate the angles used in each stage, the higher the score they will get. 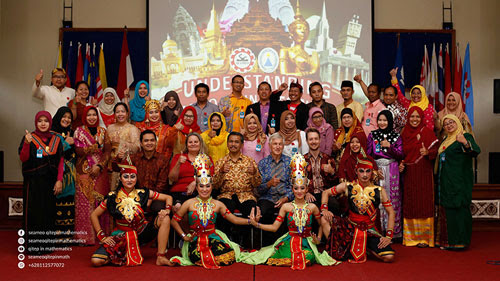 With this in mind, SEAQiM incorporated the idea of mathematics as an art in the session Understanding SEAMEO Countries Culture. Having backgrounds in mathematics, teachers are able to present a great dancing performance in a very limited amount of time. The dance consists of symbols and patterns as well as timing of the rhythm, which are basically mathematical concepts performed in reality.

For people out there who think dance has nothing to do with mathematics, think twice. Mathematics is not merely just equation to be memorized. How to turn this subject into a fun activity, goes back to the teacher’s creativity. One way to teach this subject is through dancing.